I just love finding new items to try. I was at the farmer’s market one day and saw something called papalo. I’d never heard of it and had no idea how to use it, but I bought a bundle and did some research.

Turns out that papalo is an herb that grows wild in Mexico, Arizona, and Texas. Most popular in Mexican cooking (although it’s also used in South American cuisines), it’s been compared closely to cilantro. It looks nothing like cilantro but its flavor is mildly cilantro-like with citrus overtones. In fact, it is often used in dishes in place of cilantro. It tends to be used in raw applications more than cooked ones, and is especially popular in salsas and guacamole.

There’s a traditional Puebla sandwich made with meat, avocado, and chiles, varying with tomatoes, cheese, and onions, and always papalo. As far as I’ve been able to determine, this sandwich is called a cemita, which is also a general word (in Spanish) for “sandwich.”

The word papalo comes from the Native American Nahuatl word for butterfly, papalotl. (Interestingly, it’s similar to the French word for butterfly, papillon.) But I’ve come across numerous names for papalo, including Bolivian coriander (coriander being the word for cilantro in many countries), butterfly weed, pápaloquelite, tepegua, quillquiña, quirquiña, and killi. 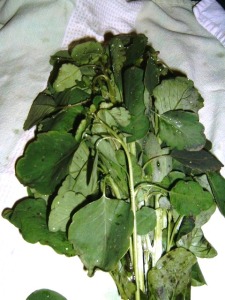 Despite the prevailing belief that papalo should not be cooked, I used it in a batch of vegetarian chili and, predictably, it gave it a citrusy note. The chili seemed somehow “fresher” and more summery. That’s obviously my own association with the flavor profile of the chili but the papalo definitely gave it a nice little zing.

Here’s a recipe for a simple tomatillo salsa, using papalo. Let me know what you think.

Finely chop the tomatillos and place in a bowl. Add remaining ingredients and mix well. Chill for at least ½ hour to allow the flavors to blend.