More spaghetti squash? Why not? It’s squash season, after all. Squash is synonymous with autumn.

Although spaghetti squash can be found from fall through the spring, there’s something comforting and pleasurable about roasting vegetables in the fall, especially squash. And since many people aren’t sure what to do with spaghetti squash, I’ve been offering some recipes. Last week, I offered Easy Spaghetti Squash Chili. This week, I have for you Roasted Maple-Bourbon Spaghetti Squash with Amaranth Pilaf.

Cultivated by the Aztecs 8,000 years ago, amaranth is a tiny little grain that is surprisingly high in protein, as well as other nutrients. One cup of raw amaranth contains 28 grams of protein, 15 milligrams of iron, and 18 milligrams of fiber, which makes it one of the most nutrient-rich grains on earth.

Amaranth is also a great source of lysine, a protein-rich amino acid. This is good news for those of us who suffer from canker and cold sores. L-lysine has been shown to shorten the life span of canker sores. I can personally attest to this because when one of those little monsters starts making itself known, I start digging into the giant bottle of lysine, and believe me, it works.

So this dish makes the perfect side dish to any autumn meal, but because of the amaranth and almonds, it also is a satisfying entree on its own. And spaghetti squash is low in calories, low in carbs, and almost fat free, so whatever diet you may be on, you can’t go wrong with this squash. You can serve it in lovely slices, or you can scrape out the spaghetti-like flesh and eat it like a pasta dish.

Make the Bourbon-Maple Glaze and set aside. Toast the almonds in a small, dry skillet, stirring occasionally, until lightly browned on both sides. When they’re cool enough to handle, coarsely chop them. Set aside. 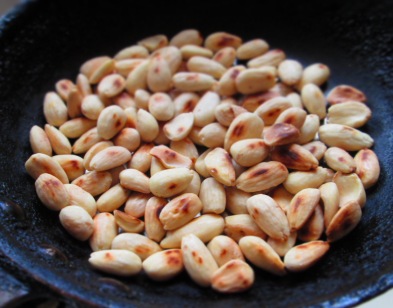 Preheat oven to 375 degrees F. Brush a baking sheet with a little oil. Cut the squash In half lengthwise. Remove the seeds from the center, and cut the halves into slices about ½ inch thick.

Lay the slices on the baking sheet. Brush both sides of the slices with the glaze. Add the red onion slices. You can place them alongside the squash or tossed over them. (Placing them on the side makes it easier to stir them.) Sprinkle 1/2 teaspoon salt over everything.

Roast for about 20 minutes until their undersides are browned. Turn the squash over and stir the onion slices. Continue roasting until squash is tender when pierced with the tip of a knife, about another 20 minutes.

Heat 1 tablespoon oil in a wide skillet. Add the garlic and sauté until fragrant, about 1 minute. Add the amaranth and stir to coat it with the oil. Toast the amaranth in the oil until slightly browned, about 2 or 3 minutes. 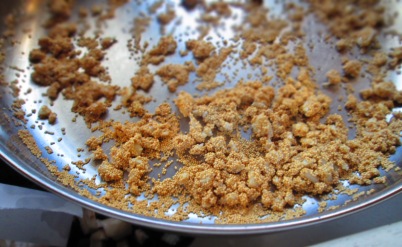 Add the mushrooms and 1 teaspoon salt. Saute until mushrooms start to brown, about 15 minutes.

Add the cabbage and broth. Cover and simmer until liquid is absorbed, about 20 minutes. Stir in the almonds and remove from heat.

When you’re ready to serve, place some of the amaranth pilaf on each plate, a couple of squash slices on that, and some onion on top of that. Or, to serve family style, place all the pilaf on a large platter, align the squash over it, and sprinkle the onion over the top. 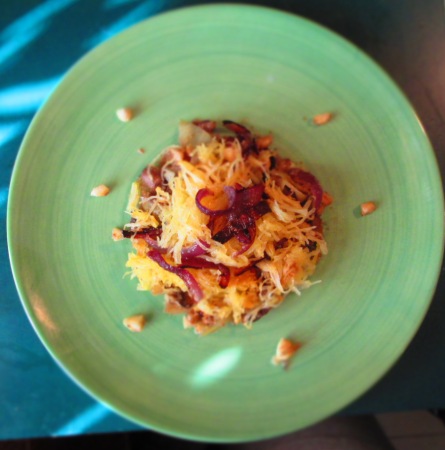 A sliver of a #rainbow

A sliver of a #rainbow