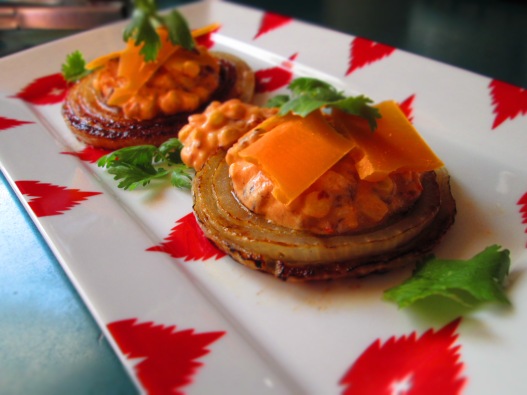 So, I’ve been fortunate enough to attend several events hosted by The French Cheese Board in New York City. This past month, I attended a soiree at their new location in in Little Italy. (Although, judging from the hip space and chic crowd, I’m tempted to call it a Soho party.) There was an amazing selection of cheeses and I had my fill, for sure.

Anyway, the very nice people at The French Cheese Board were gracious enough to offer me some cheeses to experiment with. And who am I to turn down such generosity? No one, that’s who. I requested three kinds of cheeses, and below is the first recipe I came up with. This one uses one of my new favorite cheeses, Mimolette. 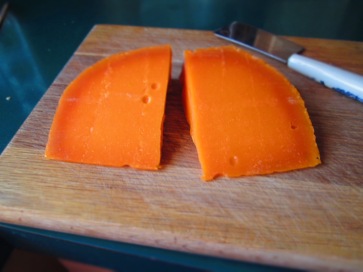 Mimolette is a sharp cheese, and has nutty, fruity undertones. It’s easily spotted within a selection of French cheeses because it’s the color of cheddar (except more vibrant), and has a thick, granular-looking crust.

I thought that both the color and flavor would go well with vegetables, so I decided to make Caramelized Onion Rings with Chipotle Cream and Mimolette. Caramelized onions are incredibly divine, but if you’re not a fan, try this with grilled asparagus or grilled or roasted sweet potatoes slices.

Remove the husk and silk from the corn and grill it. If you don’t have a grill, you can put the corn right on top of a gas burner on the stove. Turn as needed until a bit charred on all sides. (Alternatively, you can broil it.) 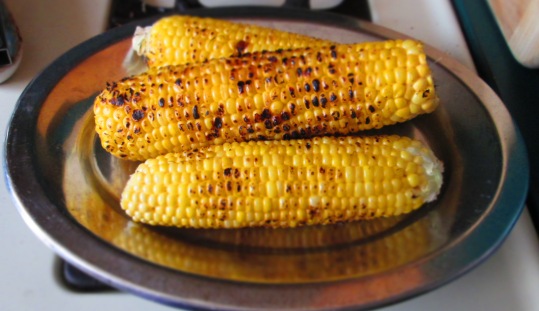 Cut off the kernels with a sharp knife and set aside. 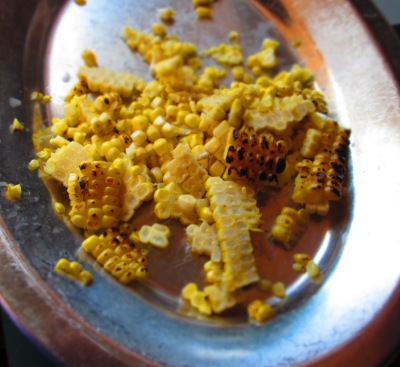 Slice the onions into rings about ½-inch thick (keep the rings together).

Heat the oil in a frying pan; add the onions and 2 teaspoons salt and carefully place in the oil, making sure to keep the rings together). Cover and cook over low heat until they soften. Turn up the heat to medium-high and cook until they’re browned underneath. Turn them over uses 2 spatulas (or gently with tongs), and continue cooking until golden brown. Remove them from the pan and set them on a serving platter.

In a medium bowl, combine the sour cream or yogurt, chipotle (with whatever sauce you get with it), corn, and pinch of salt. Whisk together. 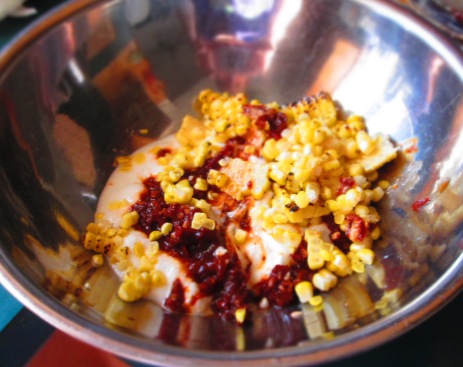 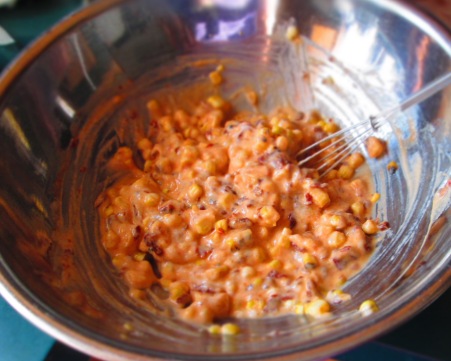 To serve, place a tablespoon or two of the sauce on top of each. Place some of the shaved Mimolette on each, then top with a sprig of cilantro. Serve with extra sauce on the side. (If you like, you can put them in the oven briefly to partially melt the Mimolette, but do this before putting the cilantro on it.) Serve hot as an appetizer or accompaniment to a main dish.

One thought on “Caramelized Onion Rings with Chipotle Cream and Mimolette”

A small table again this year, but a good one. Have a safe, healthy and happy #Thanksgiving. #thanksgivingdinner #holiday

A small table again this year, but a good one. Have a safe, healthy and happy #Thanksgiving. #thanksgivingdinner #holiday