Last week, I made guava puree from fresh guavas that I had found at the market and made guava quesadillas. I had plenty of puree leftover and promised you a guava cocktail. So now I’m delivering.

Guava puree makes for a complexly flavored drink, but also a sweet drink. So, if you prefer your drinks less sweet, you may want to cut back on the guava. Increasing the amount of rum—as good as that sounds—won’t cut the sweetness—it will just make a really strong drink!

I had purchased (unknowingly) white guavas instead of pink ones. If you get white guavas, you might want to throw in a bit of grenadine for a deliciously red color. The pictures you see here were taken before the grenadine. I stirred some in later and decided that I liked it, but it was too late for photos.

So, while the summer is hanging on by thread and guavas are still appearing at the market, grab some and try this drink. For the rest of the year, use guava paste, which I discuss HERE. 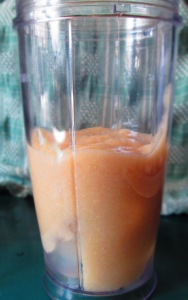 Place all the ingredients in a blender, along with a few ice cubes. Blend until smooth. Pour into 2 glasses and garnish with an orange slice and/or a sprig of mint.

I was passing by a market that had some fruit on display outside. I was paying no attention to it, but something caught my eye. They had a box of mini round watermelons. They looked so cute, I had to have one. So, I picked one out and took it home. (I paid for it first, of course.)

When I cut it open, I discovered that it was a yellow watermelon. They hadn’t labeled it yellow—the sign only said “sweet.” I love finding yellow watermelons. They’re like yellow topazes, sparkling in the light.

Unfortunately, it was a lot prettier than it was tasty. They lied. It wasn’t sweet.

Now I had to find a way to enjoy this melon without resenting the money I paid for it.

So, I cut it up and put some booze in it. But not just any booze. I had this beautiful elderflower rum that I picked up at a farmers’ market in Vermont and it paired perfectly with the melon. Then I decided to mash it and make it into a slushy. END_OF_DOCUMENT_TOKEN_TO_BE_REPLACED