Garlic scapes are one of summer’s treasures and if you have a farmers’ market near you, try to find some. They’re available for a short time in early summer. Scapes can be used in many different ways—basically, any way you would use garlic or onions. Last week, I used them with beet greens (very tasty!). 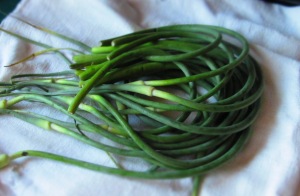 For this recipe, I used garlic scapes as the flavor base for lentils. Scapes lend the dish a mellow garlic-like taste but there’s more complexity to it. The addition of fresh herbs really elevate this to a gourmet meal, but the simplicity can’t be beat. The final result is so flavorful and something really special. END_OF_DOCUMENT_TOKEN_TO_BE_REPLACED

I was just commenting to someone that I sometimes feel that I cook more in summer than in winter. That seems counter-intuitive, but there’s a reason for this. With summer comes all the beautiful vegetables that you can’t get in winter (or they’re not as good in winter), and I definitely want to take full advantage.

One of those things is garlic scapes, which are available for a short while in early summer.

At the farmers’ market this week I found garlic scapes, as well as beets with beautiful lush leaves. Usually I cook beet greens with garlic, so I thought that garlic scapes would work well too. And they do. END_OF_DOCUMENT_TOKEN_TO_BE_REPLACED

One of the best things about summer is all the beautiful, luscious tomatoes that become available. So this is the season for tomato salads. It’s almost not even worth it to make tomato salad any other time of the year.

This is a simple Chilean version, which gets a bit of a kick from minced Serrano or jalapeno pepper. But if you like, you can omit it. Choose any tomatoes you like—there are so many options this time of year! Heirloom varieties make a stunning salad, but good old beefsteak tomatoes do better than fine. END_OF_DOCUMENT_TOKEN_TO_BE_REPLACED 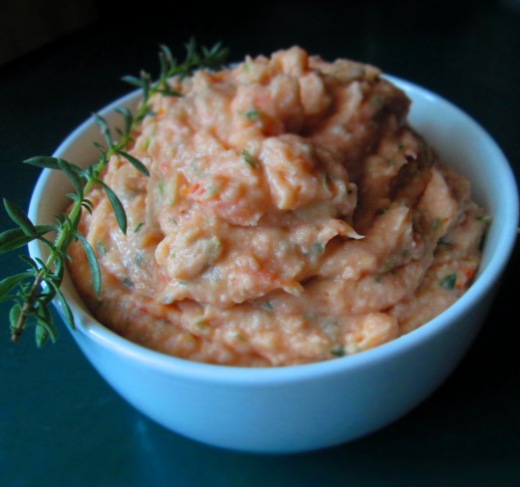 I recently found myself with an abundance of dried Great Northern beans, and if you stopped by here last time, you saw that I took some of those beans to make Tomato-y White Beans.

I had cooked up a huge batch, so I needed to come up with something else. And, as I also said last time, because it’s summer, I’ve had access to a bunch of tomatoes. Well, both they went into a food processor for a white bean spread. With a few additional ingredients, this is a flavorful, filling, yet light, snack. It’s also perfect to taking to a picnic or barbecue. 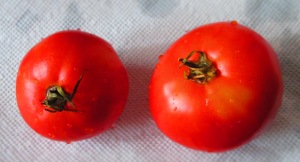 END_OF_DOCUMENT_TOKEN_TO_BE_REPLACED

Sometimes you go through your pantry or refrigerator and see a bunch of stuff that you know you have to use or it will go bad. It’s been that way with me and all of these dried beans I realized I had. And since it’s summer, I also find myself with a steady influx of tomatoes.

So, I cooked up a mess of Great Northern beans, added some fresh tomatoes from my mother’s garden, and got this: tomato-y white beans. It’s really simple, so I hope you give it a try.

Place the beans in a bowl and cover with water by about 3 inches. Cover and soak overnight.

The next day, drain the beans and place them in a medium pot. Add water to cover by about 2 inches. Add the bay leaves. Smash two of the garlic cloves and add them to the pot, along with half the onion, and 1 teaspoon of the salt. Bring to a boil. Lower the heat to low; partially cover the pot, and simmer until the beans are tender but still firm, about 45 minutes.

Drain the beans in a colander and remove the bay leaves and garlic and discard. Finely chop the rest of the garlic. 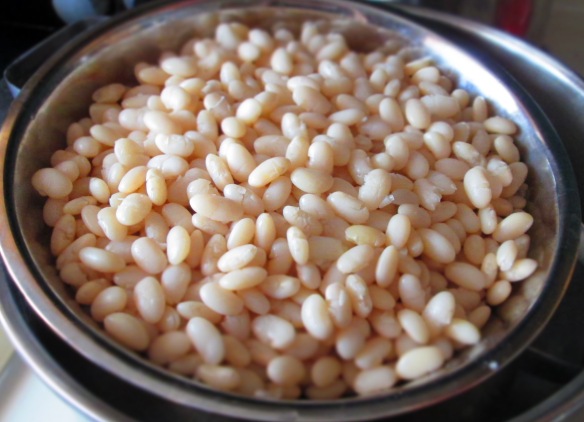 Add the beans, broth, and herbs (I had basil, savory, and parsley), and cook for about 5 minutes, or until it thickens.

You’re ready to eat. Have it over rice, pasta, or with crusty bread.

Summer is almost over. Technically, we have until September 22, but the kids are back in school, the stores are already displaying holiday merchandise, and my neighbor’s trees have red leaves in them. As much as I love autumn, I’m always sad when the summer comes to a close. It’s never long enough, is it?

But there’s still time to enjoy some summer activity and summer deliciousness, including the wonderful stone fruit that are still available. And if you grow your own mint, it’s probably out of control by now. Here’s a way to use both: Minty Peach Salsa.

This salsa was inspired by a peach salsa I bought at a farmer’s market in Virginia. I set out to replicate it and made a few modifications to make it a little less sweet and a bit spicier. It’s very simple and perfect for those last summer picnics or barbecues. It also makes a great condiment for grilled veggies, chicken, or fish.

You can substitute the peach with nectarines, plums, or apricots, but I find that peach works the best. It has the right flavor and texture to complement the other ingredients.

Enjoy the salsa and what’s left of summer!

1. Combine all ingredients in a medium bowl. Refrigerate for an hour before serving to allow the flavors to blend.

2. Taste for seasoning and adjust, if necessary, before serving. Serve with tortilla or pita chips.