I hope you are all doing all right during the COVID-19 lockdown. Many of you are spending your time trying out new culinary delights, so I thought I’d throw this one into the mix.

I happened to get a container of beautiful fresh currants in a recent Misfits Market box and decided to do the simplest (and most practical) thing with it: jam.

Fresh currants are somewhat hard to find (at least in my part of the world), so this is a (really) small batch recipe. This will essentially give you enough jam for about 4 pieces of toast (or 2, if you like to slather it on).

Wash the currants well by placing them in a bowl of water and adding a little vegetable wash or dish soap. Rinse them well in a mesh strainer (especially if you use dish soap).

Remove the stems and discard them. If you’re going to use the traditional canning method, prepare a small jar.

Place the currants in a small nonreactive (non-aluminum) pot and crush them lightly with a fork or potato masher. 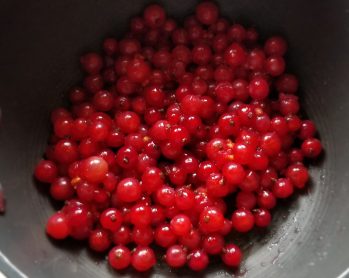 Add the sugar and 2 teaspoons water and stir. Bring to a boil over high heat. Continue to boil, stirring frequently, until the mixture coats the back of a spoon without dripping, about 10 to 15 minutes. 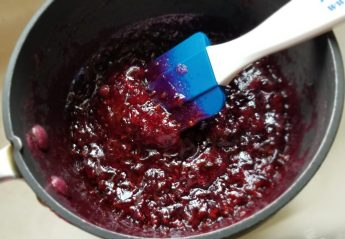 Spoon the jam into a clean jar and seal it. If you’ve sealed it using the canning method, the jam will keep sealed up to a year. Otherwise, refrigerate up to 3 weeks. 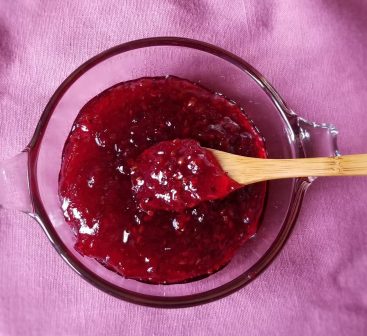 Hi there. This week, I decided to take a little rest stop on my ongoing journey through my Regions of Italy project.

So I got these two Meyer lemons in my Misfits Market box and was trying to figure out what to do with them. Two is not enough to do any kind of substantial lemon dessert (like a pie). What could I make with just two? Then it occurred to me that I could make a nice little batch of marmalade. So that’s what I did. The recipe is very simple. As you can see, there are only two ingredients, plus water. That’s it.

Originally from China, Meyers lemons are a cross between lemons and a mandarin oranges. It has sweeter flavor than regular lemons with a distinct orangey taste. The skin, rather than being “lemon yellow,” has an orange blush to it. It’s also edible.

Quarter the lemons length wise, then slice each quarter thinly. Remove as many seeds as possible.

Place the lemons in a medium saucepan (not aluminum!) and add 1 1/3 cups water. Cover the pot and leave it out at room temperature overnight (at least 12 hours).

Bring the pot to a boil, then lower the heat to medium-low. Simmer, uncovered, until the liquid is reduced to half, about 20 minutes.

Add the sugar and return to a boil. Simmer over medium heat, uncovered, until the mixture is thick. Stir occasionally and skim off any foam from the top. This should take about 15 minutes. You’ll know it’s done by doing the plate test: Place a small plate or bowl in the freezer for a few minutes, then take it out and drop a little of the lemon liquid on it. After a minute, it should gel up.

Transfer the marmalade to a small jar with a tight-fitting lid and seal while hot. If you want to store the marmalade for long term, boil the jars for 5 to 10 minutes. Otherwise, it should stay in the refrigerator up to 6 weeks.