Hi, fellow foodies. We are in full pumpkin swing and candy is popping up all over the place! If you haven’t already, start stocking up because those trick-or-treaters will be knocking on your door in about a week. And you don’t want your house toilet papered, do you?

For any of you having ghoulish gatherings and sinister soirees, there are lots of horrific recipes out there that will make your guests scream…or at least look twice at what they’re eating and drinking. There are recipes out there for every type of ghoulish treat, from cute ghosts and witches to truly horrifying zombies and body parts. 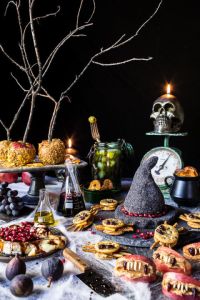 If you’re going to be doing any pumpkin carving, don’t throw away all that fabulous flesh and those beautiful seeds! To me, throwing out all that stuff is an abomination. You can prepare the flesh and use it in recipes, the same as you would canned pumpkin. Never done it before? I’ll tell you how.

END_OF_DOCUMENT_TOKEN_TO_BE_REPLACED

One of my favorite things about the autumn holidays is baking with pumpkin. Every year, I try at least one or two new pumpkin recipe. This one is an homage to the people in my life who have gluten issues.

I call this recipe gluten-free but be aware that the flour I chose to use is spelt. If you have a gluten sensitivity, you’re probably able to eat spelt. But if you have Celiac Disease, this isn’t the recipe for you.

Pumpkin is a strong flavor and usually trumps any other flavors that it’s combined with. I wanted to make the coconut in this cake as bold as I could, so I used coconut in several forms: coconut sugar, coconut flour, coconut milk, coconut rum, and shredded coconut. This cake is dense but moist with a nice little crunch from the shredded coconut. And best of all, those of you with gluten issues don’t have to miss out on the pumpkin goodness at the holidays.

Enjoy and have a safe, healthy, happy Thanksgiving.

In a medium bowl, whisk together the spelt and coconut flours, baking powder, baking soda, cinnamon, nutmeg, salt. Place shredded coconut in a small bowl and pour rum over it. Mix and let sit.

Cream together the butter and coconut sugar until fluffy. Add eggs one at a time, incorporating each one. Beat in pumpkin puree, coconut milk, applesauce, and vanilla.

Pour into cake pan and bake 1 hour and 15 minutes, or until a knife inserted in center comes out fairly clean (the knife will be slightly wet but you don’t want to see raw batter coming out). Place on a cooling rack and let cool completely in pan, then invert onto a plate. The cake will be fragile while it’s hot.

Place confectioner’s sugar in a medium bowl. Add 1 teaspoon each bourbon and cider, then a little more at a time until it reaches the right consistency. Pour over cake. Decorate as desired.

I love having leftover pumpkin in the refrigerator because it prompts me to bake something new with it, and that’s one of the best things about the holidays. I’m not much of a pumpkin pie fan, but I love other baked goodies made with pumpkin.

This started off as a basic pumpkin cake, but I veered off a little and added a couple of items that I thought really brought it up a notch (or two): bourbon and coconut. The flavor and texture made it a huge hit. My only regret is that I didn’t get a shot of the cake after I’d iced it. I hope you all like it.

Preheat oven to 350 degree. Grease an 8-inch square or round cake pan (or line with parchment).

In a large bowl, whip butter and sugar until fluffy (the consistency should be sort of like wet sand). 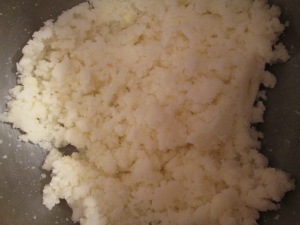 Gently mix in the pumpkin, coconut, eggs, and bourbon.

Fold in the flour mixture. 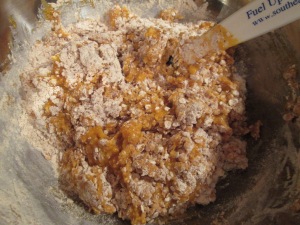 Spoon into pan and smooth out the top.

Bake until a toothpick inserted into the center comes out fairly dry (a couple of crumbs is okay), about 1 hour. 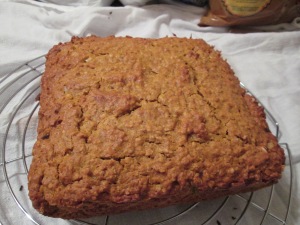 Move to a wire rack and let cook 5 minutes. Invert it onto the rack, then invert it again to be top-up. (If you used parchment paper, you can just lift it right out of the pan.) Let cook completely.

Make icing: Combine sugar and 1 tablespoon bourbon in a small bowl and stir until smooth. If too thick, add a little more bourbon; if too thick, add more sugar. Pour over top, spreading it out so that it falls over the sides. Sprinkle coconut over the top.

’Tis the season for pumpkin.

As we enter November, everyone loves finding new recipes that use pumpkin. And when the recipes are gluten-free, that makes a whole lotta people happy.

A friend of mine asked me to make cupcakes to bring to a bridal shower. This friend has health issues that necessitate her to be on a gluten-free diet and she asked that I make the cupcakes gluten free, and she specifically requested pumpkin. I came up with this recipe, and they were a hit.

I took the basic combination of ingredients for pumpkin cake and altered the recipe to make it less sweet than most cakes and, of course, gluten free. Actually, I should probably say “low gluten” instead because I substituted all-purpose flour with spelt flour. Spelt is a low-gluten wheat variant, so most people with wheat sensitivities can tolerate spelt, but those with full-blown Celiac Disease usually cannot.

I also wanted to make it lower in sugar, so I cut back on the amount called for in most pumpkin cake recipes. And because I substituted brown sugar for white, it made it a little fluffier and more flavorful.

Now here’s where I had to make a decision between a whole-food/holistic diet versus a weight loss diet. In the first category lies the basic tenet that you should eat foods in their whole forms—i.e., all its edible parts. In the case of dairy, that means with full fat. When fat is removed from dairy, the enzymes which make it digestible are also removed, making it a bigger issue for lactose-intolerant people than full-fat dairy would be.

BUT everyone is concerned about their weight, cholesterol, etc. My friend was concerned about bringing the cupcakes to the shower in the first place because the bride is overweight. She asked me if I could make them even lower in sugar than the samples I brought her. I told her that if I took out any more sugar, they would taste like nothing. Then she asked me if I could keep the frosting off, and I explained that cupcakes without frosting are muffins and hardly party fare. At first, I offered to try and experiment with alternate sweeteners (honey, applesauce, maple syrup, maple crystals) but I was faced with a time crunch. Experimenting like that—substituting ingredients that are vastly different than the original—often takes multiple tries to get right. I didn’t have the luxury of time in which to do that.

So, to compensate, I made the decision to use low-fat cream cheese for the frosting. My teachers at the Natural Gourmet Institute would tsk-tsk me, I’m sure. But I think they would also agree that we have to compromise sometimes—they themselves taught me that we can’t be “good” one hundred percent of the time. All we can do is do our best as often as possible. So, here’s my recipe for a gluten-free, low-sugar, low-fat (not vegan) but really delicous (no, really!) Pumpkin-Coconut-Walnut Cupcakes with cream cheese frosting.

2. In a medium bowl, whisk together the flour, baking powder, baking soda, cinnamon, nutmeg, and salt.

3. In a stand mixer, beat the butter until smooth. Add the sugar and beat until light and fluffy, about 3 or 4 minutes. Add the eggs, one at a time, beating in each one before adding the next. Add the pumpkin and vanilla and beat until well blended. (The mixture will look curdled but that’s okay.)

4. At low speed, add the flour mixture, a little at a time, to the pumpkin mixture. Increase speed and beat until well blended. Fold in the coconut and walnuts.

5. Place about ¼ cup of the batter into each paper cup. (Pour water into any empty muffin wells, about ¼ of the way up, to prevent them from scorching.)

6. Bake for about 30 minutes, or until a toothpick inserted into the center comes out clean. Remove from oven and let cool for 5 minutes, then transfer them to racks and let cool completely. Meanwhile make the frosting.

7. Beat the butter until white and fluffy. Beat in the cream cheese and then the vanilla. Begin adding the sugar a little at a time; alternate beating at low speed (when first adding the sugar) and high speed (to blend it in well). Stop adding when you’ve reached the consistency you want. Continue beating until completely smooth.

8. When cupcakes have cooled, spread or pipe on the frosting. Decorate as desired.