A few years ago, I introduced a recipe for Cranberry Sauce with a Sorghum Twist. I think using sorghum syrup is a great way to enjoy traditional dishes without using white cane sugar.

So, below is a reprint of my original post from 2013. I hope you like it. Have a fun, safe, and peaceful Thanksgiving.

This week in honor of last week’s episode of The Walking Dead, I offer you Warm Sorghum Salad.

Many people don’t know what sorghum is. It’s a grain that originated in Africa and that’s been used in this country for years as fodder—except in the South, where it’s been a fairly popular grain. Also in the South, sorghum molasses often takes the place of regular molasses, honey, maple syrup, and corn syrup. In short, it’s a liquid sweetener that’s used in baked goods, as well for drizzling on biscuits, pancakes, and toast.

I’ve offered other sorghum recipes here, such as Sorghum Pilaf, Sorghum Stir-Fry, and my Cranberry Sauce with a Sorghum Twist (using sorghum molasses) even made it in into the holiday issue of Pilcrow & Dagger.

Sorghum is gluten free and inexpensive. But it’s also very use friendly. It’s a diverse grain that can be used in many different dishes. Here’s my Warm Sorghum Salad. It’s great to bring to dinner in the fall and winter, but also to barbecues and picnics in the warmer seasons. And the kale makes it a well-rounded, healthy dish. Enjoy!

Place the sorghum in a mesh strainer and rinse it under running water for a minute or two. Place it in a small pot along with 3 cups water and bring to a boil. Lower the heat and simmer, partially covered, until tender, about 30 to 40 minutes. Drain well.

When you see browned bits in the pan, deglaze with the apple cider vinegar (add it to the pan and scrape up the brown bits with a wooden spoon).

Add the kale and another ½ teaspoon salt and cover; cook until kale is tender. 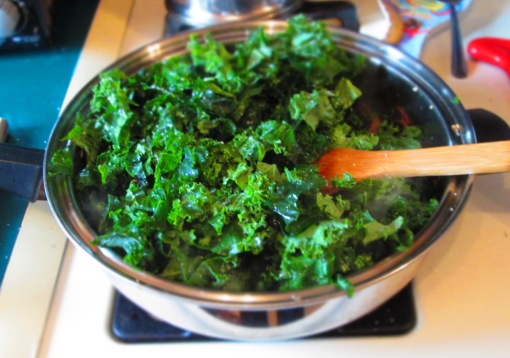 While that’s cooking, make the dressing and set aside.

When the sorghum is cooked, add it to the pan with the kale and pepper and mix. 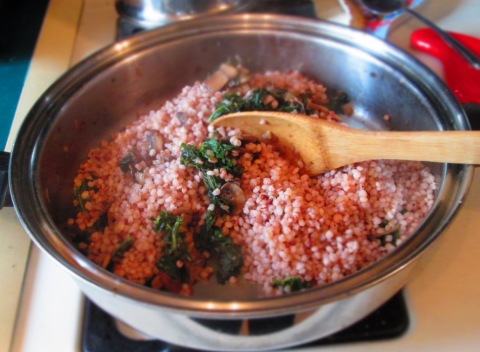 Pour in the dressing and mix well. Taste for seasoning and adjust if needed. Squeeze the lemon over it and stir.

Transfer to a serving bowl and serve warm.

Sorghum is technically a grass (but for culinary purposes is classified as a grain) that is native to Africa, and was introduced to to the U.S. in the 1800s. It’s always been an important food crop around the world, but in the U.S., it’s been used primarily as animal feed. The exception to this is in the U.S. South, where sorghum molasses is a traditional sweetener, used much in the same way as honey or maple syrup. However, with the rising interest in gluten-free and ancient grains, sorghum is becoming more and more popular as human food in the U.S.

The great thing about sorghum, apart from the fact that it’s gluten free, is that it doesn’t have an outer shell that has to be removed to make it edible. That means that it’s a whole food, and that means that it’s healthy and just plain awesome.
END_OF_DOCUMENT_TOKEN_TO_BE_REPLACED

When I step back momentarily from my hectic life, I realize that I’ve packed so much into my days, weeks, and months that lose control of what’s happening. I lose my grip on the reins and things just go all cray-cray.

And it’s because of this cray-cray-ness that it’s been such a struggle for me lately to blog regularly. I keep vowing that I will get back on track—and I always mean it—but I succumb to the insanity again and again.

One of the consequences is that I haven’t been able to cook much. I mean, I cook to test recipes or photograph for my cookbooks, but not simply for the pleasure of it. So, I have all these products in my pantry that have been just sitting there, particularly grains. But last weekend, I was determined to pull something out of the pantry and use it. It turned out to be sorghum.

Sorghum is a great gluten-free grain to have as a substitute for rice. It has a firm, meaty texture and it’s difficult to overcook. It can tend to be dry, but paired with the right ingredients, it works really well for an alternative grain fix. I prepared it on its own, then added it to a stir-fry in place of rice and the result was excellent. Now, I chose to use some cooked veggies that I had in the refrigerator, but you can use whatever vegetables you want. If you don’t pre-cook them, then make sure you stir-fry them until tender before adding the beans.

Bring 1¼ cups water to a boil. Add sorghum; lower the heat, cover, and cook for about 20-25 minutes, or until sorghum is tender but firm. If water is absorbed but sorghum still seems hard, add a little more water and keep cooking until tender.

Heat coconut oil and 1 teaspoon sesame oil in a wok or large frying pan. Add onion and garlic and sauté until softened. Add squash, yam, and eggplant and stir-fry for 5 minutes. Add beans and peas; mix in well.

Well, here we are again, preparing for that iconic American holiday, the Most Important Meal of the Year: Thanksgiving.

Every year, I make fresh cranberry sauce. Some people prefer the canned variety to freshly made, but when I see that gelled log with can rings around it, I can’t help but feel that I can do better. In fact, anyone can. Fresh cranberry sauce is extremely simple, and the end product is so much better than the canned log. (Although, I know some of you feel like it’s truly not a traditional Thanksgiving without that log with the rings around it, so I say, whatever floats your boat.)

Cranberries are a tart fruit and cranberry sauce requires plenty of sugar to make it palatable enough for most people. But I always cringe a little when I start dumping the amount of sugar that most recipes call for into my pot of cranberries. So, this year, I decided to try some of the sorghum molasses that I brought up from a trip to the South.

The recipe I’ve always used calls for 2 cups granulated sugar. That’s a lot of sugar. So, I started with 1 cup brown sugar. Brown sugar is a nicer product to use than granulated sugar because it lend the sauce a delicate molasses flavor and it thickens it up better. My sauce was still a little too tart, but I really didn’t want to add any more sugar, so I reached for the sorghum molasses. I started with 2 tablespoons and I liked the results. However, I knew that most people would want it sweeter (I don’t have a big sweet tooth), so I added 2 more tablespoons. It worked wonderfully.

Sorghum molasses is a Southern staple, but it can be found in specialty stores elsewhere in the U.S. If you can’t find it, substitute brown rice syrup, barley malt syrup, or honey (the honey will be sweeter than the others).

If you’re looking for that cloying candy-sweet taste of canned cranberry sauce, this isn’t it. But if you want something that is a little more complex, texturally pleasing, and not as loaded with refined sugar, give this a try. 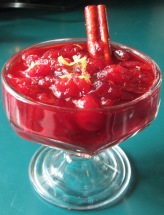 Cranberry Sauce with a Sorghum Twist

Combine all ingredients with 1 ½ cups water in a 2-quart pot. Bring to a boil; lower the heat to low and simmer until cranberries start to pop. Continue simmering and stirring for about 5 minutes, smashing the cranberries along the sides of the pot (you can leave some whole). Taste and adjust sweetener level to your taste.

Remove from heat and let cool. Transfer to a jar or bowl and refrigerate until needed. Remove the cinnamon stick and star anise before serving or use them for garnish.

Variation: Add a tablespoon of raspberry or cherry liqueur or ½ teaspoon vanilla extract.

Because sometimes, you just need it. #INeedALongVacation #cocktail #lifeis (fill in the blank)

Because sometimes, you just need it. #INeedALongVacation #cocktail #lifeis (fill in the blank)